As a Tamaranean, Starfire (Teen Titans) can harness, store, and manipulate internal solar energies as if she were a self-regenerating reactor.

The ability to manipulate bio-stellar energy. Variation of Bio-Energy Manipulation and Stellar Manipulation.

They can create, shape, and manipulate self-generated extra-stellar force. They can harness, control, and even manifest stellar energies, substances, and forces with their biofield.

Pyron (Darkstalkers) is a super alien whom had evolved into a living sun with enough power to scorch entire worlds clean of life.

Shen Xorn (Marvel Comics) possesses a living sun in his head that he can turn into a black hole at will. 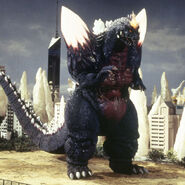 SpaceGodzilla (Godzilla)
Add a photo to this gallery
Retrieved from "https://powerlisting.fandom.com/wiki/Bio-Stellar_Manipulation?oldid=1701245"
Community content is available under CC-BY-SA unless otherwise noted.