Have a body made up of black holes.

The power to transform into or have a physical body made up of black holes. Technique of Black Hole Manipulation and Gravity Manipulation. Variation of Astronomical Physiology and Gravity Mimicry. Opposite to White Hole Physiology.

User is made up of or can transform their body completely into black hole. Users' transformed form is anatomically identical to their normal form, aside of being made of collapsed matter by gravity, in which case it contains all the organs and is somewhat vulnerable to attacks. Alternately the user can transform into homogeneous matter, without any part of their form being more important than the other.

Nigh Formed Black Hole Beings are or can change into mostly physical beings, with the energy flowing through their being, fortifying their cells, bones and muscles. Their power is mostly focused to their bodies and while they gain some amount of energy-attacks, the changes and applications are mostly internal.

Full-Formed Black Hole Beings are completely formed of energy, without anything truly left from their physical form. They gain impressive control over their form and vast capacity to control gravity, matter, energy and time in various ways by emitting Hawking radiation in their event horizons.

With proper training and control, wielders will be able to generate their own gravity construct and control it like a limb. Also, since black holes are believed to generate nethereal energy as well, it is possible that the users body will be a being of both matter and nether.

The Phoenix Force (Marvel Comics) can transmigrate throughout time and space by folding its energy back into itself, causing it to collapse akin to a black hole, and then reforms itself upon reaching its destination. 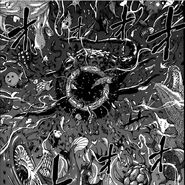 Whale King Moon (Toriko) devouring all its prey akin to a black hole.

When Sonic becomes the Violet Void, he is literally a living black hole.

Alternate Calliope (Homestuck) transformed herself into a multiversal black hole, allowing her to absorb the green sun and destroy the furthest ring.
Add a photo to this gallery
Retrieved from "https://powerlisting.fandom.com/wiki/Black_Hole_Physiology?oldid=1521990"
Community content is available under CC-BY-SA unless otherwise noted.