Misaka Mikoto (A Certain Magical Index) creating a very sharp sword out of iron sand for bending and extending to her will.

Maloney Oni (Bobobo-bo Bo-bobo) has mastered the Shadow Fist of the Dark Sword allowing him to create blades of different shapes and sizes.

Creed (Black Cat) can create a blade of alterable length and visibility out of his ki.

Shūkurō Tsukishima (Bleach) using his Fullbring to create his Book of the End sword out of a bookmark.

Ginjō (Bleach) using his Fullbring to create his Cross of Scaffold broadsword out of a satire pendant.

Dabra (Dragon Ball Z) magically materializes his Darkness Sword out of thin air, sharp and can be encased in fire.

Janemba (Dragon Ball Z: Fusion Reborn) creating a sword from an ogre's club, and can also warp a spike into an extending spear.

Kimimaro (Naruto) can form his bones into various blades, such as a short sword from his shoulder for close quarter combat...

...to a growing massive and tall forest of bone blades from the ground in order to indiscriminately slaughter all his enemies.

Users of the Rinnegan (Naruto) can manifest chakra into physical blades from anywhere on the body.

Skarmory's (Pokémon) blade-like feathers shed and regrow, and are used as swords. 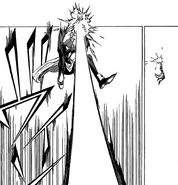 Jin Mu-Won (Legend of the Northern Blade)
Add a photo to this gallery
Retrieved from "https://powerlisting.fandom.com/wiki/Blade_Construction?oldid=1646288"
Community content is available under CC-BY-SA unless otherwise noted.