Use bladed weapons as projectiles.

The power to project bladed weapons as projectiles. Variation of Projectile Attacks.

The user can project swords and other bladed weapons at high speeds like an arrow. 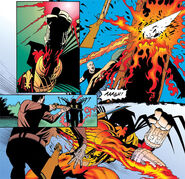 Azrael (DC Comics) firing one of his flaming swords.

...to fire red energy blades at Goku and Vegeta.

With the Weapon ÄRM, Astale Kuspus, Mercury (Marchen Awakens Romance) can create seven swords and launch them at the enemy. 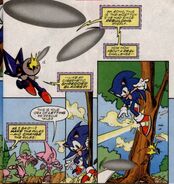 Shredder (Teenage Mutant Ninja Turtles 2014) firing his blades at Splinter.
Add a photo to this gallery
Retrieved from "https://powerlisting.fandom.com/wiki/Blade_Projection?oldid=1662152"
Community content is available under CC-BY-SA unless otherwise noted.