Interact with one's environment without the aid of vision.

"You won didn't you?"
"Oh, you knew that?"
"Yes. Perspiration, body temperature, the sound of muscles, rather than losing light, what I can see has increased... I know your fate for tomorrow too."
"Really?"
"Yes. Tomorrow won't come to you."
― Bungo Stray Dogs

"Oh, you think darkness is your ally. But you merely adopted the dark. I was born in it, molded by it. I couldn't see the light until I was already a man, by then it was nothing to me but BLINDING!"
― Bane (The Dark Knight Trilogy: Rises)

The power to interact with one's environment without the aid of vision. Variation of Disability Compensation and Handicapped Prime.

Users can act, fight and navigate while blind, in darkness or otherwise sightless. The user's eyes may or may not have an influence on this power. The user can be blindfolded or is permanently/or naturally blind.

Blind since his birth, Kaname Tōsen (Bleach) trained his spiritual senses to point of perfection as he could "see" and easily fight opponents. 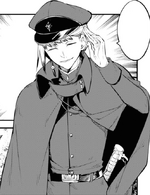 Despite being blind, Saigiku Jono (Bungo Stray Dogs) can accurately grasp and discern his surroundings using his superhuman sense of hearing. 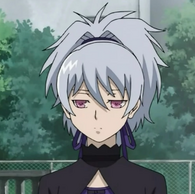 Even when blinded, Son Goku (Dragon Ball Z) can still fight and navigate using his Chi Detection, which he demonstrates by dodging Yakon on a planet of total darkness...

Despite being blinded by Lavender's poison, Son Gohan (Dragon Ball Super) uses his Ki Sense to block his attacks and keep fighting.

Born blind, N'Doul (JoJo's Bizarre Adventure Part III: Stardust Crusaders) had phenomenally sharp hearing being able to determine the position of a fly simply by listening to it fly or hear faint sounds such as grains of sand bouncing against an obstacle hundreds of meters away from him. 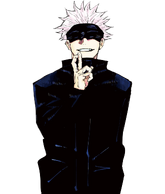 Despite being born blind, Gyomei Himejima (Kimetsu no Yaiba) can fight at speeds faster than the eye can see using his acute sense of hearing that can even detect echoes in his weapon when he swings it around, allowing him to get an accurate grasp of the surroundings.

After Obanai Iguro losing both his eyes, he (Kimetsu no Yaiba) relies on his pet snake Kaburamaru who can predict his opponent's attacks and relay the information to Obanai himself in order to fight. 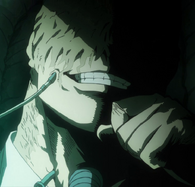 After his eyes were scarred by All Might, Shigaraki/All For One (My Hero Academia) uses Infrared Quirk to compensate for his blindness.

Issho/Fujitora (One Piece) has mastered the use of Kenbunshoku/Observation Haki to compensate for his blindness.

Nai (Zettai Karen Children) has been blinded with a blindfold since birth to make her less prone to emotions, she relies on her powerful sensing abilities when fighting and is able to 'sense' other people emotions, though after the surgery her eyesight has improved. 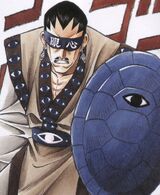 After being blinded by Shishio in a duel, Usui Uonuma (Rurouni Kenshin) gained the "Mind's Eye" and through training it allowed him superhuman hearing that acted like a sonar.

...which more than compensated his blindness.

Nina (Shingeki no Bahamut) is blinded with a white blindfold cloth, making her have "Mind's Eye" to erect her maximum concentration capacity to wrestle with Charioce XVII during the arm wrestling match (Nina has good shape, beauty and fine vision, but she is afraid of her dragon transforming when watching handsome guy. She tied her blindfold cloth very tightly on her eyes and had ability of blindsight ).

Even though Toph was born blind, she (Avatar: The Last Airbender) feels the vibrations in the earth to know what's happening in her surroundings. 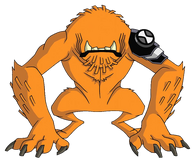 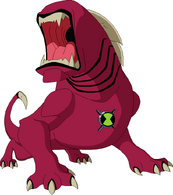 Though naturally blind, Doctor Mid-Nite (DC Comics) possesses an extraordinary vision that allows him to see to an extent.

Even though he is blind, Matt Murdock/Daredevil (Marvel Comics) is able to perfectly navigate through his surroundings.

When deprived of his sight, Peter Parker/Spider-Man (Marvel Comics) can use his spider-sense to navigate his surroundings...

May Parker/Spider-Girl (Marvel Comics) using her spider-sense to fight and navigate while blindfolded.

Sentinels (How To Train Your Dragon) are naturally blind dragons, but they compensate for this by developing extremely heightened senses of hearing and smell to navigate and track other dragons. 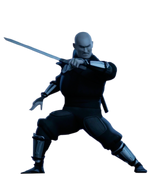 Raymond Connor/Daredevil (Ultimate Marvel) developed enhanced senses on par with Matt Murdock's after being blinded in an accident, allowing him to navigate and fight despite his disability just like his predecessor.

After accidentally blinding himself with the Golden Lotus Clap, Po (Kung Fu Panda) relied on his sense of smell and turn off the lights so Junjie can used his sense of hearing to even the fight. 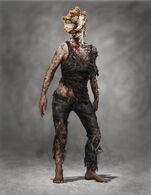