Navigate your surroundings without being able to see

"Oh, you think darkness is your ally. But you merely adopted the dark; I was born in it, moulded by it. I couldn't see the light until I was already a man, by then it was nothing to me but BLINDING!"
― Bane (Dark Knight Rises)

"Is she looking at us?"
"She can't see. Hence, she cannot actually look. So, no."
― Tuffnut and Ruffnut Thorston (Dragons: Race to the Edge)

The power to interact with one's environment without the aid of vision.

The user can act, fight and navigate while blind, in darkness or otherwise sightless. The user's eyes may or may not have an influence on this power.

Even though Toph (Avatar: The Last Airbender) was born blind, she feels the vibrations in the earth to know whats happening in her surroundings.

Kaname Tousen (Bleach) was blind from birth, but by training his spiritual senses to perfection he can "see" and fight. 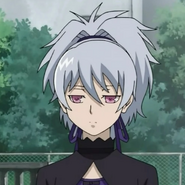 Though naturally blind, Doctor Mid-Nite (DC Comics) possesses Infrared Vision that allows him to see to an extent.

Even when blinded, Son Goku (Dragon Ball Z) can still fight and navigate using his Chi Detection, which he demonstrates by dodging Yakon on a planet of total darkness...

...and dodging attacks from Syn Shenron shortly after.

Despite being blinded by Lavender's poison, Gohan (Dragon Ball Super) uses his Ki Sense to block his attacks and keep fighting.

Even though he is blind, Matt Murdock/Daredevil (Marvel Comics) is able to perfectly navigate through his surroundings.

When deprived of his sight, Peter Parker/Spider-Man (Marvel Comics) can use his spider-sense to navigate...

Mayday Parker/Spider-Girl (Marvel Comics) using her spider-sense to fight and navigate while blindfolded.

Issho/Fujitora (One Piece) has mastered the use of Kenbunshoku/Observation Haki to compensate for his blindness.

Raymond Connor/Daredevil (Ultimate Marvel) developed enhanced senses on par with Matt Murdock's after being blinded in an accident, allowing him to navigate and fight despite his disability just like his predecessor.
Add a photo to this gallery
Retrieved from "https://powerlisting.fandom.com/wiki/Blindsight?oldid=1429723"
Community content is available under CC-BY-SA unless otherwise noted.