Use the traits of blob.
The power to use the abilities of blob. Not to be confused with Slime Physiology.

User with this ability either is or can transform into a Blob, an amorphous being with the ability to disintegrate and consume anything. They are often implacable due to their unique (lack of) anatomy, with intelligence ranging from mindless eating machines to trickster shape shifting organisms.

They are often based on jellyfish, amoebas and similar invertebrates (or, in sillier cases, gelatinous desserts), and found throughout horror, fantasy and speculative fiction environments.

The Blob (The Blob) 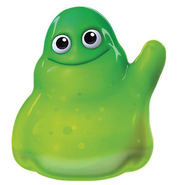 Limon (Kofi)
Add a photo to this gallery
Retrieved from "https://powerlisting.fandom.com/wiki/Blob_Physiology?oldid=1556091"
Community content is available under CC-BY-SA unless otherwise noted.