Zangetsu (Bleach) is a notable user of this ability.

The power to stop bleeding. Sub-power of Blood Manipulation.

The user has the power to stop themselves or others from bleeding. 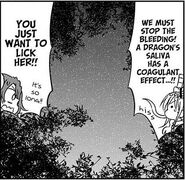 The Platelets (Cells at Work) serve to react to and close up bleeding injuries...

...by gathering and binding red blood cells together at the site of said injuries.