Azula (Avatar: The Last Airbender) was the first firebender in the history of the Fire Nation who could control blue flames.

The power to manipulate blue flames. Variation of Fire Manipulation.

The user can create, shape and manipulate blue flames, which are far hotter and more intense than ordinary orange fire. The blue flames are of such color due to either the intense temperature or it possesses mystical properties.

Rin Okumura (Blue Exorcist) can control/generate blue flames called the Flames of Satan whenever he enters his demonic form.

Liz Sherman (Hellboy) generating blue flames with her body after getting hit (as her request) by John Thaddeus Myers. 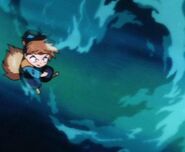 Marco the Phoenix (One Piece) can summon blue flames from his body. 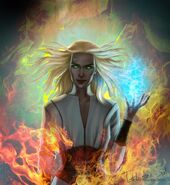 Dabi's (My Hero Academia) Quirk grants him the ability to generate blue flames from his body.
Add a photo to this gallery
Retrieved from "https://powerlisting.fandom.com/wiki/Blue_Fire_Manipulation?oldid=1412351"
Community content is available under CC-BY-SA unless otherwise noted.