The ability to amplify the physical attributes of one's biology. Sub-power of Body Manipulation.

User can select any physical attributes of their anatomy, biology or physiology and focus on/enhance them, enabling drastic changes from enhancing skin density to shifting the malleability of the skeletal structure and generating new organs with various functions. 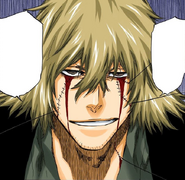 ...including himself to fix his injuries or increase his strength.

Alex Mercer (Prototype) can shift his biomass around to, among other things, enhance his muscle mass and increase his striking power.