Meelo (The Legend of Korra), a budding master in the art of Fart Bending

manipulate the release of bodily gases (often to noxious effect)

The ability to control gases generated by the body, often in the form of flatulence and belching. Sub-power of Corporeal Evacuation.

User can generate/induce and manipulate the bodily gases, including belching (burping) and flatulence (farting) at will, from one's own body and/or the bodies of others. In addition, one can control length, smell, volume, and power, even to the point of producing sonic belches, producing sonic flatulence, causing foes painful gas buildup, or preventing undesired belching and flatulence.

The Spleen (Mystery Men) demonstrates his ability via having his fingers pulled and "firing" a SBD (Silent Butt Deadly) over a distance of 7 meters. 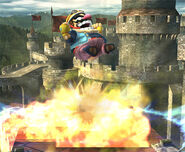 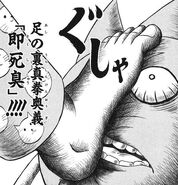 Olive (Canimals) unleashes her big fart.
Add a photo to this gallery

Retrieved from "https://powerlisting.fandom.com/wiki/Bodily_Gas_Manipulation?oldid=994212"
Community content is available under CC-BY-SA unless otherwise noted.