The Atom (DC Comics) both current & previous, learned to alter his bodily mass and density with and without his Bio-Belt.

The ability to manipulate own mass and density. Variation of Body Manipulation. Technique of Body Supremacy.

The user can manipulate their bodily mass and density at a sub-molecular level, allowing them to adjust their weight, size, density, body fat and muscular tissue production by shunting and drawing excess mass from another dimension. 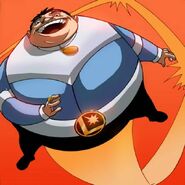 The Ghost (Marvel Comics/Marvel Cinematic)
Add a photo to this gallery
Retrieved from "https://powerlisting.fandom.com/wiki/Bodily_Mass_Manipulation?oldid=1699054"
Community content is available under CC-BY-SA unless otherwise noted.