Jason Voorhees (Friday the 13th) ripped a paintballer's arm off.

"But sir, nobody worries about upsetting a droid." "That's 'cause droids don't pull people's arms out of their sockets when they lose. Wookiees are known to do that."
― Han Solo to C-3PO (Star Wars)

User can rip out/off the body parts from a target's body, whether it be the arms, legs, organs, head, spine, etc. Usually done by brute force, or can be done supernaturally as well. 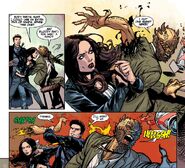 Urizen (Devil May Cry 5) has ripped Nero's Devil Bringer off.

The Bride (Kill Bill) rips an opponent's eye from its socket.

Wookiees like Chewbacca (Star Wars) are infamously well known for ripping off the arms of their foes and cheaters.
Add a photo to this gallery
Retrieved from "https://powerlisting.fandom.com/wiki/Body_Part_Ripping?oldid=1418214"
Community content is available under CC-BY-SA unless otherwise noted.