Shed the body or skin.

The ability to shed the one's body or skin like a snake. Sub-power of Skin Manipulation.

The user is capable of shedding their body or skin and emerge with a new body, even after dismemberment.

Le Papillon (Grindhouse and Watercolors) is prone to shed its form and creates a new one whenever it creates a universe, whatever's left of its old body ranging from fossilized remnants to landforms, natural phenomenon and even living, breathing abstract prosopopeians. 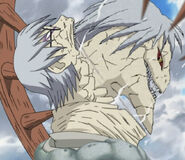 During the final stage of his transformation into a super-soldier, Billy Miles (The X-Files) bloodily sheds his skin.
Add a photo to this gallery
Retrieved from "https://powerlisting.fandom.com/wiki/Body_Shedding?oldid=849275"
Community content is available under CC-BY-SA unless otherwise noted.