Use the traits of the Bogeyman.

"I was the dark in the cave! I was the shadow in the trees! You've heard about... the primal scream? That was... at me!"
― The First Bogeyman, Discworld

"From ghoulies and ghosties and long-leggety beasties and things that go bump in the night, good Lord, deliver us!"
― Welsh Prayer

"It's not just the wind. It's not all in your head. And it's definitely something to worry about."
― Bump in the Night, Magic: The Gathering.

"Don't fear the dark. Fear me."
― The Secret World

The power to use the abilities of the Bogeyman. Variation of Cryptid Physiology.

The user is or has the ability to take on the form of a Bogeyman an amorphous being that has no specific appearance. In many cases, it has no set appearance, but is simply a non-specific embodiment of terror.

The Bogeyman often targets children, either to simply scare them or for some other nefarious purpose, they are primarily designed to enforce social norms and behavior, as well as keep children from doing things that are dangerous - for example the medieval Bugbear was a scary bear that lurked near the edge of woods to deter children from entering woods (which were home to wild animals and criminals), river-hags were invented to keep children from playing near water and drowning, likewise trolls and goblins became a common tactic to stop children playing in marshes or abandoned ruins.. tales of the kelpie and other water-horses prevented children disturbing both wild horses and horses that belonged to nobles (who would likely take vengeance on those who dared disturb their prized equines).

While still practice the tradition of scary stories and monsters to keep children away from dangerous areas the practice of using bogeymen to force children into "good behavior" is no longer seen as socially acceptable and has fallen out of favor in many places - nevertheless the bogeyman itself is a powerful icon that has spread across almost every culture on Earth and thus survives as a deep-rooted part of human imagination.

See Also: Things That Go Bump in the Night.

Oogie Boogie (The Nightmare Before Christmas) 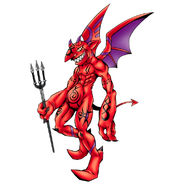 The Boogie Man (The Powerpuff Girls)
Add a photo to this gallery
Retrieved from "https://powerlisting.fandom.com/wiki/Bogeyman_Physiology?oldid=1693051"
Community content is available under CC-BY-SA unless otherwise noted.