The power to regenerate one's own bones. Sub-power of Bone Manipulation. Variation of Regenerative Healing Factor and Bone Generation. Opposite to Bone Removal.

The user can regenerate their bones should they be harmed, or even grow a new bone altogether.

Sylar (Heroes) got his neck broken by an aggressive Peter Petrelli...

...but quickly regenerates his neck and his bones.

Medaka Kurokami (Medaka Box) was able to regenerate every bone in her body within 90 seconds.

The Skele-Gro (Harry Potter) is a vile tasting potion that regenerates missing bones. 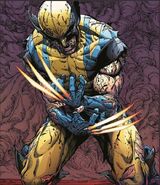 Ghost Rider (Marvel Comics)
Add a photo to this gallery
Retrieved from "https://powerlisting.fandom.com/wiki/Bone_Regeneration?oldid=1397791"
Community content is available under CC-BY-SA unless otherwise noted.