The Hōgyoku (Bleach) can dissolve the boundaries between Shinigami and Hollow.

"As far as we know, everything is built upon the existence of boundaries. If there was no water surface, there could be no lake. If there was no sky line, neither mountain nor sky could exist. Were it not for the Great Barrier, even Gensokyo itself wouldn't exist. If there were no boundaries, everything would probably exist as a single enormous object."
― Hieda no Akyuu (Touhou Project)

The ability to remove boundaries. Sub-power of Boundary Manipulation. Opposite to Boundary Restoration. 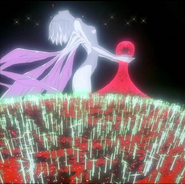 Rei Ayanami (Neon Genesis Evangelion) removing the AT Field, the boundary of individuality, of every human being except Shinji, Asuka and Gendo.
Add a photo to this gallery
Retrieved from "https://powerlisting.fandom.com/wiki/Boundary_Removal?oldid=1500220"
Community content is available under CC-BY-SA unless otherwise noted.