The ability to create bow and arrows. Sub-power of Bow Manipulation. Variation of Artillery Creation and Weapon Creation.

The user can construct bows (including crossbows) and arrows from nothing or by shaping the existing matter or energy allowing them to attack from distance. Depending on what the weapon is made of, it can posses a variety of abilities and be very effective in both offensive and defensive combat.

Uryū Ishida (Bleach) constructs a spirit bow with his power.

Fuu Hououji (Magic Knight Rayearth) with her bow and arrow.

Venus (Marchen Awakens Romance) can create a bow with the Darkness ÄRM, Arrow of Eros. Whoever she shoots will be forced to fight whoever’s name they hear first. 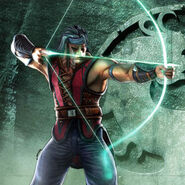 Yukari Takeba (Persona 4 Arena Ultimax) with her bow and arrow. 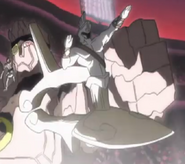 Allura (Voltron Force) has an energized bow and arrow as her Voltcom weapon.