Successors (Project ARMS) are cyborgs so advanced that they no longer retain their brain, with their thought patterns digitized and backed up in a quantum computer.

"Hit me with your best shot, Baldy. But my mind's been gone for thirty-odd years. You can't break what's already broken!"
― Old Man McGucket (Gravity Falls)

The power to have no brain. Sub-power of Defunct Physiology.

The user either doesn't have a brain or has a completely nonfunctional one, rendering them immune to head traumas and powers targeting the brain.

See Also: Who Even Needs a Brain?.

Duckman (Duckman) has no brain, since the brain-feasting parasite Ceti Eel just went through his head and out.

Phillip J. Fry (Futurama) starved the Brain Slug attached to him to death. 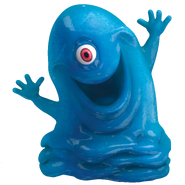 B.O.B. (Monsters vs Aliens) is literally brainless, making him immune to things that would normally affect those who have them.

Homer Simpson (The Simpsons) has no brain, since brain-eating zombies rejected him and continue to search for someone who does have a brain to feast on.
Add a photo to this gallery
Retrieved from "https://powerlisting.fandom.com/wiki/Brainlessness?oldid=1523473"
Community content is available under CC-BY-SA unless otherwise noted.