Used by members of the Demon Slaying Corps, Total Concentration Breathing (Kimetsu no Yaiba) is an esoteric breathing technique that greatly enhances a human's physical and mental prowess to nigh-superhuman levels by maximizing oxygen intake.

"Breath deeply, until sweet air extinguishes the burn of fear in your lungs and every breath is a beautiful refusal to become anything less than infinite."
― D. Antoinette Foy

"Do not be afraid, Ryoku Sui. Direct me with your Azure Divine Chi. Deeper and deeper, stronger and stronger... With this. There is no one that may prove a match for me!!"
― Kyou Kai (Kingdom)

"Power in firebending comes from the breath. That is why you must master proper breath control."
― Jeong Jeong (Avatar: The Last Airbender)

The power to become empowered by breathing. Technique of Breath Manipulation. Variation of Body Function Empowerment. Not to be confused with Air Empowerment.

Users becomes stronger, faster, more durable, etc. from the breathing of oneself or others, possibly unlocking abilities related to the affinity and enhancing existing powers. Some users may be able to draw sustenance from the breath or even slow or stop aging.

As the Sky Dragon Slayer, Wendy Marvel (Fairy Tail) can absorb air to enhance her magic power and physical abilities through mouth breathing. 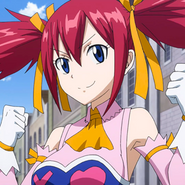 Through controlled breathing, users of Ripple/Hamon (JoJo's Bizarre Adventure) can produce energy identical to the Suns, manifesting as ripples throughout their body, in polar opposition to the energy exerted by Vampires, Zombies, and the Pillar Men.

...reputed to be the strongest of her generation, Kyou Kai has mastered an entire lifetime of Clan Shiyuu's breathing techniques to the very pinnacle...

...the one to obtained the official title of Shiyuu, Yuu Ren was undeniably a highly-skilled fighter.

Lana Prata (Using My God Skill Breathing to Level Up, I Will Challenge the Dungeon of the Gods) is able to become stronger and gain a level up every time he breathes via the use of his Divine Breathing skill.