Use the traits of brownies.

The power to use the abilities of brownies. Variation of Mythic Physiology.

User with this ability either is or can transform into a brownie, a household spirit from British folklore that is said to come out at night while the owners of the house are asleep and perform various chores and farming tasks. They are usually envisioned as ugly and their appearances are sometimes described as frightening or unsettling to members of the houses in which they reside. They received their name from the fact that they are usually described as brown-skinned and completely covered in hair. 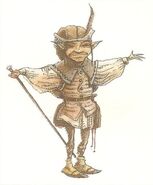