Use the traits of a Bugbear.

The power to use the abilities of a Bugbear. A mix of Bear and Bogeyman Physiology

Users of this ability can take on the traits of a Bugbear (or are one), the Bugbear is a malevolent goblin in the form of a large and frightening bear that would stand near the edges of forests in English folklore, waiting to lure away children and then devour them - they were classic examples of bogeymen and acted as a means to discourage children from playing near forests, which at the time would have housed dangerous wild animals and criminals. 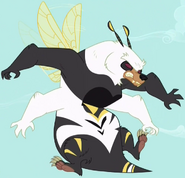 Bugbears (My Little Pony: Friendship is Magic)
Add a photo to this gallery
Retrieved from "https://powerlisting.fandom.com/wiki/Bugbear_Physiology?oldid=1663367"
Community content is available under CC-BY-SA unless otherwise noted.