Mine (Akame Ga Kill!) wielding the Roman Artillery: Pumpkin that fires spiritual energy bullets, which gets progressively stronger if she is in danger.

The power to fire bullets of energy/matter from one's own body. Sub-power of Attack Powers. Variation of Projectile Attacks.

The user can fire bullets of energy/matter (whether organic, inorganic, objects, etc.) from their own body as opposed to a firearm. 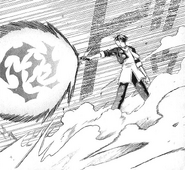 ...and firing an Orichalcum bullet out of Hades, which is capable of destroying any material on Earth.

Durham Glaster (Black Cat) using his Shot ability to channel his ki through a gun barrel to shoot virtually limitless amounts of ki bullets that he can vary in size and destructive potential.

Yammy Llargo (Bleach) using Bala to fire off bullets of spiritual energy from his fists.

Aisslinger Wernarr (Bleach) rapidly firing blasts of spiritual energy from each of his fingertips.

...and using his Cero Metralleta to fire a barrage of spiritual energy.

Ggio (Bleach) can throw the "Fangs" of his mask to great speed against his opponent. 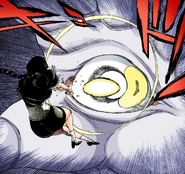 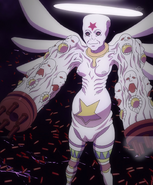 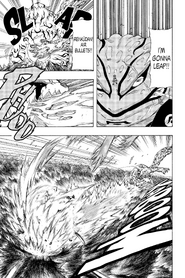 Gengetsu Hōzuki/Second Mizukage (Naruto) using his clan's Water Gun Technique to fire a compressed water bullet that can pierce through a sand clone. 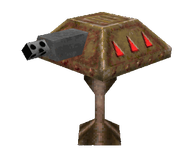 As they truly live up to their design of being robotic guns that are embedded into the ground or walls, the Turrets (New Blood Interactive's DUSK) can shoot bullets at various intruders they are programmed to take down.

Portgas D. Ace (One Piece) firing off his Fire Gun, bullets of fire.

Borsalino/Kizaru (One Piece) firing a light-based laser beam from his fingertips...

...and a barrage of destructive photon bullets with his Yasakani no Magatama.

Younger Toguro (Yu Yu Hakusho) using his Finger Flip Bullet attack, projecting bullets of air with but a flick of the thumb.

Shinobu Sensui (Yu Yu Hakusho) switching to his Kazuya personality, who pulls out an Energy Gun.

Danny Fenton (Danny Phantom) can project his Ghost Rays in a gun style move.
Add a photo to this gallery

One Minute Melee - Master Hand Vs Polygon Man (Smash Bros vs PlayStation All-Stars)
Add a photo to this gallery
Retrieved from "https://powerlisting.fandom.com/wiki/Bullet_Projection?oldid=1676438"
Community content is available under CC-BY-SA unless otherwise noted.