As the ultimate feruchemist, The Lord Ruler (Mistborn) can store any attribute he needs and release it when necessary.

Store anything that affects oneself.

The ability to cache anything that affects one's being. Technique of Personal Mastery.

User is able to cache/store anything that has an affect on their being. This includes but is not limited to energy, sleep, pain, oxygen, emotions or even vision. The user is able to create an excess amount of an effect that they do not experience until they decide to restore it. This allows the user to perform feats otherwise unobtainable due to lack or overburden of an effect. 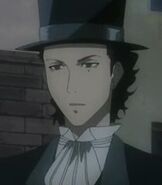 Tyki Mikk (D.Gray-Man) is able to use his special power "Choose" to store teez in his body, releasing them for combat.
Add a photo to this gallery
Retrieved from "https://powerlisting.fandom.com/wiki/Cache?oldid=1500292"
Community content is available under CC-BY-SA unless otherwise noted.