Ziltoid the Omniscient (Devin Townsend Project) travels the Omniverse, threatening invasion of the Earth for the universe's ultimate cup of coffee in hopes of harnessing its power.

"You'll be so wired, you'll see into other dimensions. Any more caffeine and you'll start vibrating off sound waves. Caffeine plus is dangerous to the human body, addictive to the mind, poisonous to the soul and sheer heaven with a pack of smokes."
― The Technocracy (Mage: The Ascension)

The power to gain strength from consuming caffeine. Variation of Affinity and Drink Empowerment. Technique of Coffee Manipulation.

Users become stronger, faster, more durable, etc. by consuming caffeinated products, possibly unlocking abilities related to the affinity and enhancing the existing powers. Some users may be able draw complete sustenance from it or even slow or stop aging. 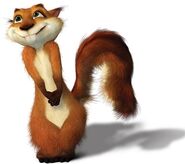 Should Hammy (Over the Hedge), who is energetic as it is, consume caffeine, his body moves so fast everything looks as though time stops.

...he gained speed so immense that time seems to have stopped around him, allowing him to rescue everyone from a raging inferno, and even put out the flames.
Add a photo to this gallery

Family Guy - Peter On Red Bull Full HQ
When Peter Griffin tried Red Bull, his already scatter-brained mind warped into a hyperactive state. This granted him temporary enhanced speed and strength.
Add a photo to this gallery
Retrieved from "https://powerlisting.fandom.com/wiki/Caffeine_Empowerment?oldid=1658461"
Community content is available under CC-BY-SA unless otherwise noted.