User with this ability either is or can transform into Caipora an entity of the Tupi-Guarani mythology in Brazil, appearing as a woman or a dwarf with bright red, orange or dark skin and hair and. Caiporas can be violent with those who decide to hunt in their woods, scaring away prey and "hides" animal tracks or makes hunters lose their way in the jungle. It disorients the hunters by simulating animal noises and by leaving fake tracks. 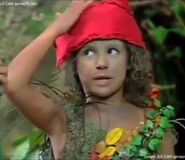 Flora Caipora (Sítio do Picapau Amarelo)
Add a photo to this gallery
Retrieved from "https://powerlisting.fandom.com/wiki/Caipora_Physiology?oldid=1382351"
Community content is available under CC-BY-SA unless otherwise noted.