Jesse Turner (Supernatural) is the son of a demon father and a virgin human mother.

Use the traits of cambions.

The power to use the abilities of cambions. Variation of Mythic Physiology and Hybrid Physiology. Demonic counterpart of Nephilim Physiology.

User with this ability either is or can transform into a Cambion: a being (most commonly one of the first generation) with human and demonic ancestry.

Note: In mythology, cambions are considered to be the result of a union between an demon and human. This is similar to the conception of the Demigods in mythology. Just like said demigods, cambions can come in forms other than the traditional kind. Said forms would involve being a human who went through a form of ascension, where they became a demonic being themselves (e.g: Cordelia Chase from Buffy the Vampire Slayer, Lilith from Jewish Folklore & Demi Fiend from Shin Megami Tensei). Another form would be a human with a Demonic Soul.

As partially mortal they are more bound to their form than their non-mortal parent, but their personalities and minds are far less defined by their spiritual aspect. In some forms of media, Cambions are shown to be equal or higher in power than full demons, this is generally explained with the claim that the human soul enhances the spiritual/demonic power gained from their "parent".

The combination of mortal and physical with immortal and immaterial is highly unpredictable, and someone with heritage from both sides can lean on either side of their ancestry. Thus, cambions can be divided into three broad groups:

Near-Mortal Cambion: favors their mortal parents or are more distant descendants. They are mostly similar to their mortal kind in both mind and body, but with some additional abilities and instincts. Outwardly there are few or no indications that the individual is anything but normal.

Balanced Cambion: is balanced between their heritages, if sometimes rather precariously, and have both free will and a good amount of power. There are likely a number of definite traits and instincts that draw them toward their inhuman side. Physically they tend to have at least a few indications about their non-mortal parentage, but the amount varies greatly between individuals.

Following powers are among the most common ones cambion may have:

In a unique case, Cordelia Chase (Buffy the Vampire Slayer) was not born a cambion but became one through the use of magic.

Dante and Vergil (Devil May Cry) are twin cambion sons of the powerful demon Sparda and the human Eva.

Nero (Devil May Cry) is the son of Vergil, nephew of Dante, and grandson of Sparda.

Raven (Teen Titans) is the half-human daughter of the human, Arella, and the demon, Trigon.

Inuyasha (InuYasha) is the half-breed son of the human female, Izayoi, and the Inu no Taishō.

Leah (Diablo) is the daughter of the human witch Adria and the Dark Wanderer, who was possessed by the demon lord Diablo.

Magnus Bane (The Mortal Instruments) is the offspring of a demon and a human.

Vali Lucifer (High School DxD) is the offspring of a human and a devil.

The Daughters of Aku (Samurai Jack) are the seven daughters of the human High Priestess and the demon-god Aku.

The Lilim (DC Comics) are the demonic spawn of Lilith, the first human woman. 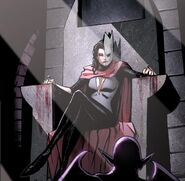 Mazikeen (DC Comics), one of the Lilim.

Mistress Nyx (Vampirella) is the daughter of the demon god Chaos and the high priestess Lucretia.

Lord Drago (Vampirella) is the son of Lilith, the first human woman, and Camazotz the Death-Bat. 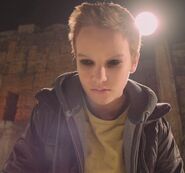 Daniel "Danny" Ketch (Ghost Rider: Spirit of Vengeance) is the son of the human Nadya Ketch and the demon Mephistopheles.

Hellboy (Hellboy) is the son of a male demon Azzael and a human witch, Sarah Hughes.
Português do Brasil
Community content is available under CC-BY-SA unless otherwise noted.