Evil Witches (Hansel & Gretel: Witch Hunters) are known to have an appetite for human children, drawing strength from it.

"In the frozen land of Nador, they were forced to eat Robin’s minstrels…and there was much rejoicing"
― Narrator (Monty Python and the Holy Grail)

"Welcome son. To survive...all we must do is eat your flesh."
"Hold it right there bub. What kind of civilized people eat the body and blood of their savior?"
― Soldier and Marge Simpson (The Simpsons)

"No. There's already a soda like that, Soylent Cola."
"Oh. How is it?"
"It varies from person to person."
― Turanga Leela and Philip J. Fry (Futurama)

The power to gain strength from cannibalism. Variation of Organic Empowerment and Consumption Empowerment.

User becomes stronger, faster, more durable, etc. from the act of cannibalism: eating the flesh of a member of one's own species, like a human eating another human, possibly unlocking abilities related to the affinity and enhancing their existing powers. Some users may be able to draw sustenance from the act or even slow or stop aging.

Hollows (Bleach) normally just devour human souls, but if they get stronger their hunger increases so much they'll start devouring other Hollows...

...Eventually becoming a Gillian, a powerful amalgamation of countless Hollows that are constantly fighting for dominance of the main body...

...and if one of its minds wins, it'll become a much more powerful Adjuchas, which can keep getting stronger through eating even more Hollows.

Aaroniero Arruruerie (Bleach) gains strength by cannibalizing like all Hollows, but he is unique even among that as he also gains all the memories and unique abilities of those he devours.

Ikomikidomoe (Bleach) gains strength by cannibalizing like all Hollows, but he is unique even among that as he also breaks down and completely integrates their spiritual powers into himself.

Level 3 Akuma (D.Gray-man) are not above devouring fellow Akuma below their levels.

Aldrich, Devourer of Gods (Dark Souls III) was a cleric that developed an appetite for his fellow man. This eventually led to him becoming so bloated and grotesque that he became a monstrous sludge-like creature.

Everyman (DC Comics) can change his form by eating the parts of other humans.

When a Rugaru (Supernatural) tastes human flesh, they complete their metamorphosis from human to monster.

By repeatedly cannibalizing other ghouls, Ken Kaneki (Tokyo Ghoul) became more powerful until he manifested a Kakuja, a secondary kagune that acts as body armor. 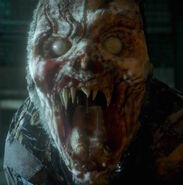 Wendigos (Until Dawn) are a supernatural race of monsters that manifest when a human commits cannibalism on Blackwood Mountain due to the presence of the malevolent spirit Makkapitew. 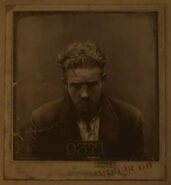 Billy Bates (Until Dawn) was forced to eat the bodies of dead miners to survive being trapped in the mines, turning him into a Wendigo.

The Makkapitew (Until Dawn) is a malevolent spirit that haunts Blackwood Mountain and is responsible for the existence of the Wendigos that prowl its forests. 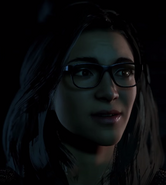 After nearly falling to her death off of a cliff, Hannah Washington (Until Dawn) was forced to eat her sister Beth's corpse to survive...

...forcing her transformation into a Wendigo.

Tōkajin (InuYasha) ate humans who showed even the slightest spiritual powers to enhance his own.

...inheriting Carmel's Soru Soru no Mi in the process. 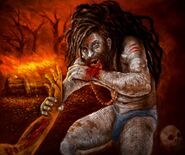 the Anthropophage (Greek Mythology) were a lawless tribe of cannibalistic humanoids ruled only by violence. 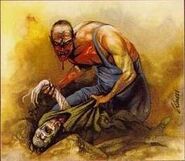 (Vampire: The Masquerade) Diablerie, also called the Amaranth, is a term used by vampires to describe the act of drinking another Cainite's blood and drawing their soul into one's own.
Community content is available under CC-BY-SA unless otherwise noted.