Bloodman (Fairy Tail) using "Over Skelter" to release skeletal corpses to attack and swallow his victims.

The power to control the dead flesh of corpses. Sub-power of Undead Manipulation.

The user can control and manipulate corpses and dead flesh to any degree. They can use dead flesh to act as replacements for severed limbs or hurl corpses at their opponents as a form of attacks.

Giselle Gewelle (Bleach) can control the flesh of the dead. 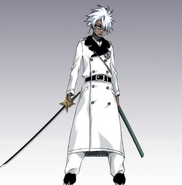 Toshiro Hitsugaya (Bleach) under the control of Giselle Gewelle after being zombified.

Azmodan (Diablo) can cause a rain of corpses to fall on his enemies and cause damage to them.
Add a photo to this gallery
Retrieved from "https://powerlisting.fandom.com/wiki/Carcass_Manipulation?oldid=1358174"
Community content is available under CC-BY-SA unless otherwise noted.