The power to manipulate cards as well as being able to use them however thee user wants. Variation of Object Manipulation and Literary Manipulation.

The user can create, shape and manipulate cards of all kinds, including playing cards, tarot cards, trading cards/Trading Card Game (TCG) cards, etc., shaping and combining them as needed, or moving them with telekinesis. The user is also able to imprison people within the cards. They can also turn whatever they touch into cards being able to turn it back to its normal form after using the cards. It depends upon the abilities the user has and the level of skill and power they have. 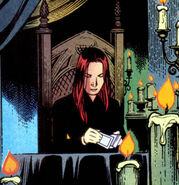 Tubalcain Alhambra (Hellsing)
Add a photo to this gallery
Retrieved from "https://powerlisting.fandom.com/wiki/Card_Manipulation?oldid=1454829"
Community content is available under CC-BY-SA unless otherwise noted.