The ability to receive powers through cards. Variation of Powers Via Object. Not to be confused with Card Empowerment.

The user can use cards to grants themselves or others powers depending on the type of card they use. Cards generally are used for games which can make any field a potential card game situation for the user and with each card they draw they can get different powers. Cards can have various effects such as spells, empowerments and summonings abilities which cam grand a great number of possibilities.

Sakura Kinomoto (Cardcaptor Sakura) can use the Clow Cards to grant herself a wide variety of supernatural powers. 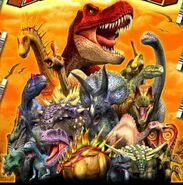