Cait Sith (Aria) The King of all cats.

Use the traits of Cat Sìth

The power to use the abilities of Cat Sìth. Variation of Mythical Bestiary, Feline Physiology and Fairy Physiology.

User with this ability is or can transform into Cat sìth (also Cat Sidhe, Cath Sith, Cait Sidhe, Fairy Cat), a fairy creature from Celtic mythology that resembles a large (about the size of dog) black cat with a white spot on its chest. They are intelligent, can converse in human tongues and walk on two legs, making no sound as it moves.

For the most part, the Cait Sith were seen as fearsome, but they were also capable of bringing blessings. They could steal a person's soul before it was claimed by the gods by passing over a corpse before burial. On Samhain, it was believed that a Cat Sìth would bless any house that left a saucer of milk out for it to drink, but those houses that did not let out a saucer of milk would be cursed into having all of their cows' milk dry.

Some folklore suggests that the Cat Sìth was not a fairy, but a witch that could transform into a cat and back eight times. If one of these witches chose to go back into their cat form for the ninth time, they would remain a cat for the rest of their lives. It is believed by some that this is how the idea of a cat having nine lives originated. 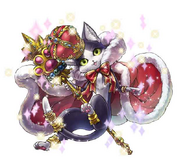 Cait Sith (Valkyrie Crusade)
Add a photo to this gallery
Retrieved from "https://powerlisting.fandom.com/wiki/Cat_S%C3%ACth_Physiology?oldid=1500372"
Community content is available under CC-BY-SA unless otherwise noted.