Atum (Egyptian Mythology) was a self-created deity, the first being to emerge from the darkness and endless watery abyss that existed before creation.

Be a Self Created Being.

"Are you machine or being?"
"I am both... and neither. I am my own beginning, my own ending"
― James T. Kirk and The Guardian of Forever (Star Trek)

The power to be a Self Created Being. Variation of Self Origin Manipulation. Personalized version of Creator Deity Physiology. Combination of Omnificence and Autopotence.

Users are a self-created being who owe their existence to no one other than themselves due to the fact that they brought themselves into existence unattended. Because of this, they possess godlike power and stand at the Zenith of creation and existence. With this power, they are able to be completely free of any being or law, Supreme and otherwise. 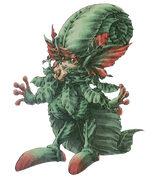 Sproutlings (Legend of Mana) owe their life and existence to no one, they simply come into existence out of nothing without any rhyme or reason.
Add a photo to this gallery
Retrieved from "https://powerlisting.fandom.com/wiki/Causa_Sui_Physiology?oldid=1756174"
Community content is available under CC-BY-SA unless otherwise noted.