The power to become the embodiment of censorship. Variation of Concept Embodiment and Censorship Manipulation. 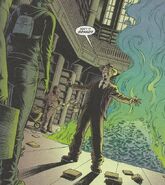 Censors (Psychonauts) are beings that dwell the mental plane, censoring out wayward thoughts and foreign entities out of people's minds to keep them sane.
Community content is available under CC-BY-SA unless otherwise noted.