The power to manipulate chains and chain-like weapons. Variation of Object Manipulation and Weapon Manipulation. 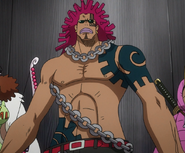 Maruss (Zatch Bell!) can create and control a chained metal ball with his Eijasu Garon spell.
Add a photo to this gallery
Retrieved from "https://powerlisting.fandom.com/wiki/Chain_Manipulation?oldid=846244"
Community content is available under CC-BY-SA unless otherwise noted.