Son Goku (Dragon Ball: the Path to Power) channeling his ki energy around him to unleash his famous Kamehameha blast.

The ability to channel anything. Sub-power of Energy Manipulation and Superpower Manipulation. Variation of Mysticism. Users of this power are sometimes called Channelers.

User can channel/harness anything, including energies, powers, emotions, etc, in their surroundings, within themselves, others, so on, and utilize it towards a myriad of possible ways, depending upon one's capabilities and potential. 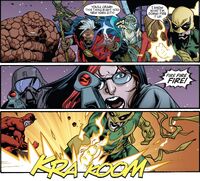 ...and focusing it into a single point.

Mai Kawakami (Musaigen no Phantom World) can channel the Spirits of the Five Elements ability to infuse the water element into her fighting style...

...and the fire element as well.

Nora Valkyrie (RWBY) channels electricity through her body to enhance her strength.
Community content is available under CC-BY-SA unless otherwise noted.