Be empowered by chaos.

The power to be empowered by chaos and chaotic forces. Technique of Chaos Manipulation. Variation of Affinity and Chaos Power Link. Opposite to Order Empowerment.

Users become stronger, faster, more durable, etc. by/from chaos, possibly unlocking abilities related to the affinity and enhancing the existing powers. Some users may be able draw sustenance from the chaos or even slow or stop aging.

Akuma has been empowered by the chaotic energy of the Satsui no Hadou. 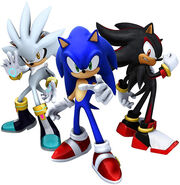 The Trickster (The Sarah Jane Adventures) fed on chaos
Add a photo to this gallery
Retrieved from "https://powerlisting.fandom.com/wiki/Chaos_Empowerment?oldid=1379083"
Community content is available under CC-BY-SA unless otherwise noted.