The Chaos Gods (Warhammer) can influence Chaos in all its myriad forms.

"I will make of you an incoherent mass! A tangle of unrelated notions! I will make you chaos itself!"
― Lord Chaos (Marvel Comics)

"Straw Hat! You're the worst troublemaker in the World!!"
― Buggy to Monkey D. Luffy (One Piece)

"It's been two years since the Paramount War!!! And who exactly has been moving events? You've done nothing more than maintain peace and tranquility. Whitebeard only left a mark on our times. Navy Headquarters has bolstered itself with new strength!!! None of the other big players have acted...as though they've only been preparing!! That war was nothing more than a prologue. Like you've said, a new age is coming with unmatched power... An age of the daring and mighty!!! Well, now I've destroyed the gears!! And no one can turn back!!!"
― Trafalgar D. Water Law to Donquixote Doflamingo (One Piece)

"Death, chaos, insanity... that woman drags destruction behind her!"
― Rogue on the Scarlet Witch (Marvel Comics)

The power to create and cause chaos. Sub-power of Chaos Manipulation. Variation of Inducement. Opposite to Order Inducement.

The user can cause chaos in any scale, from minor disorder, confusion and/or disobedience, up to causing massive storms, destruction, loss of laws and order to cause mass panic, etc.

Gremlins (Gremlins) are masters of inducing chaos and panic wherever they go. 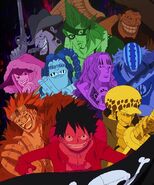 The Worst Generation (One Piece) are 12 of the most powerful and fearsome pirates of the modern era, regarded by the World Government to be their worst nemesis for the immense chaos and disorder they've caused around the world...

....Marshall D. Teach/Blackbeard had not only caused the fall of the Drum Kingdom but also masterminded the Battle of Marineford which led to the death of his former captain Whitebeard and commander Portgas D. Ace, indirectly causing the chaos of the New Age of Pirates...

...causing immense havoc to the Three Great Powers, Monkey D. Luffy demonstrated his chaotic attitude by burning the World Government's flag on the judicial island of Enies Lobby later declaring war on them...

...defeated the strongest assassin in the history of CP9 and their deadliest killing machine, Rob Lucci, while rescuing his crewmate Nico Robin...

...punched out a Celestial Dragon...

...orchestrated and lead the very first mass-riot/escape within Impel Down, the world's most impenetrable prison during his attempted rescue of his brother, Portgas D. Ace...

...challenge the rulers of the New World, the Four Emporers/Yonko, picking a fight with Charlotte Linlin/Big Mom to save his crewmate Sanji...

...and Kaido, captain of the Animal Kingdom/Beast Pirates to liberate the people of Wano...

...as the most violent and daring member of the Worst Generation, Eustass Captain Kid, is notorious for causing numerous civilians casualties...

...Trafalgar D. Water Law formulated a series of master plans against Donquixote Doflamingo that crippled illegal arms trade for all the crime syndicates within the New World, and the ambition of the Emperor, Kaido...

...Capone Luke Bege caused conflict in the criminal underworld of the West Blue by assassinating mafia leaders and masterminded the attempt to assassinate Big Mom, throwing her territory into utter disorder...

Charlotte Linlin/Big Mom (One Piece) had wreaked havoc on countries for sweets, ordered the destruction of entire countries, and massacred countless people while stealing unique ingredients for her Tea Party for sadistic amusement.

Like Big Mom, Kaido, the King of Beast (One Piece) is a tyrannical Yonko who enjoyed violence and chaos...

...his most infamous act being allying with Kurozumi Orochi to conquered the Wano country by killing Oden and all samurais who stood against them,...

..turning the once-prosperous Wano Country into a polluted wasteland where countless people starved to death.

Even while having a conversation, Bullseye (Marvel Comics) passes the time by unleashing utter chaos with nothing but paper clips.