"According to the philosopher, Ly Tin Wheedle, chaos is found in greatest abundance wherever order is being sought. It always defeats order, because it is better organized."
― Terry Pratchett

The power to manipulate the chaotic forces of the universe. Variation of Reality Warping. Opposite to Order Manipulation.

The user can create, shape and manipulate the chaotic forces in the universe, allowing them to manipulate probability or manipulate and even shatter reality. They are able to change, mutate, destroy or otherwise manipulate any matter, space/time, living beings, organizations or minds and spirits as well as containing it, so it doesn't spread or spreads only on desired way.

Enerjak (Arhcie's Sonic the Hedgehog) has complete mastery of the Chaos Force. 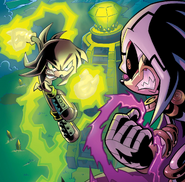 Lord of Nightmares/L-sama (Slayers) is both the supreme god of the slayers universe as well as the embodiment of Chaos, as such her intentions are to return all things to the sea of chaos in the end.

Exploring the SCP Foundation- SCP-4010 - Attempt to Look at What We Accomplished-2
한국어
Community content is available under CC-BY-SA unless otherwise noted.
Advertisement