Nightmare (Soul Series), infused with the spirit of Inferno, the true spirit of the chaotic Soul Edge he wields.

The ability to wield or create weapons with anarchic power. Variation of Chaos Object and Power Weaponry. Opposite to Order Weaponry.

User can to create or wield weaponry with power over chaos, which grants the user a wide variety of anarchically-based abilities, including mass destruction. This ability is not only specific to mystic weapons, but also technologically advanced weapons. The power of the weapons depends on what they were created for or what level of chaos-based ability they posses. 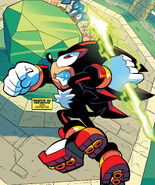 When she becomes overcome by her malfestation, Pyrrha Alexandra (Soul Series) becomes Pyrrha Ω, a crazed user of the Soul Edge.
Add a photo to this gallery
Retrieved from "https://powerlisting.fandom.com/wiki/Chaos_Weaponry?oldid=1680226"
Community content is available under CC-BY-SA unless otherwise noted.