After having his senses inverted because of a experimental medical treatment, Fuminori (Saya no Uta) gained the ability to see the true chaotic state of existence.

"It is said that what we behold with our eyes is merely the surface of reality. But if we could see beneath that façade, what would lie within?"
― The Beholder opening words (The Outer Limits)

The power to view the true chaotic state that makes up existence/reality. Advanced variation of Reality Perception. Not to be confused with Chaos Sense.

User can see/view into the true chaotic state that makes up existence/reality, allowing them to know how everything in existence comes together and connects, see past any/all falsehoods and lies and anything that is normally hidden/obscured/unknown would be laid completely bare to them including the true forms of any/all eldritch and cosmic other creatures/entities.

Since at its most basic level reality is made up of an endless sea of chaos and turmoil, the user would gain complete understanding of all things in existence/reality and possibly even beyond.

See Also: Through The Eyes of Madness.

SCP-750 (SCP Foundation) removes all the filters blocking ones view, allowing whoever wears it to see reality as it truly is. 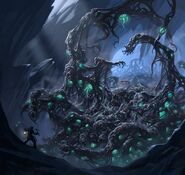 Penetrate Cosmic Ignorance (AD&D) removes all the blinders and filters that obscure existence, granting them the ability to discern and understand everything, even madness like this, as well as showing them the true chaotic nature of reality itself.
Community content is available under CC-BY-SA unless otherwise noted.
Advertisement