Hecate (Hercules: The Animated Series) could remove the most famous characteristics of Greek heroes to aid in her plans.

Remove the specific characteristics of others.

The ability to remove the specific characteristics of others. Sub-power of Mental Manipulation and Body Manipulation.

The user can remove the specific traits of others and place the victim in a state where they are devoid of the characteristic that they once had. For example, if the user used their ability on someone who prided their physical strength, then their strength would be taken from them to render the victim frail. Another example would be if the victims valued their beauty or toughness in which they would be rendered hideous or vulnerably weak by the user's power. 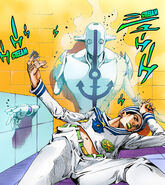 Josuke Higashikata's Stand, Soft & Wet (JoJo's Bizarre Adventure Part 8 JoJolion) can create bubbles that when popped, remove/steal an aspect of whatever they pop near, frequently of his choice.
Add a photo to this gallery
Retrieved from "https://powerlisting.fandom.com/wiki/Characteristic_Removal?oldid=1579950"
Community content is available under CC-BY-SA unless otherwise noted.