Mask De Masculine (Bleach) gains a considerable amount of zeal, stamina, and strength when he has at least one other person cheering him on.

The power to gain strength from the cheering of other people. Variation of Affinity. Not to be confused with Arena Empowerment.

User becomes stronger, faster, more durable, etc. through cheering from spectators and fans, possibly unlocking abilities related to the affinity and enhancing their existing powers. Users may be able to use the cheering to evolve onto more powerful forms or heal themselves upon hearing cheering. 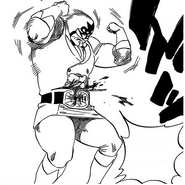 Mask De Masculine heals from being nearly cleaved in two thanks to being cheered upon. 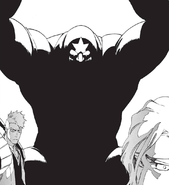 Mask reappears behind his foes after being pleaded by his fan to get up, despite having taken a significant blow.

Ember McClain (Danny Phantom) is a ghost that is empowered when others chant her name.
Add a photo to this gallery
Retrieved from "https://powerlisting.fandom.com/wiki/Cheering_Empowerment?oldid=1296721"
Community content is available under CC-BY-SA unless otherwise noted.