The power to mutate with the use of chemicals. Sub-power of Science Attuned Physiology.

The user can become abominably stronger with a different variety of powers with the use of any chemicals. They can increase their own strength and other physical capabilities, grow extra limbs or tentacles or wings or anything that may be related to animal DNA. The user can even use chemical based attacks.

Pete Clarner (Buffy the Vampire Slayer) became a monstrous, clawed version of himself after mixing up a potion. 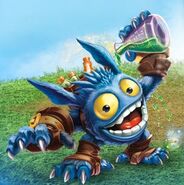 Dante (The League of Extraordinary Gentlemen) after ingesting a massive quantity of the Hyde formula.

Dr. N. Brio (Crash Bandicoot)
Add a photo to this gallery
Retrieved from "https://powerlisting.fandom.com/wiki/Chemical_Mutation?oldid=1399924"
Community content is available under CC-BY-SA unless otherwise noted.