Chemical King (DC Comics) has the ability to act as a catalyst, meaning he is able speed up, slow down, or otherwise alter chemical reactions at will

The power to manipulate chemical reactions. Sub-power of Chemistry Manipulation. Opposite to Physical Change Manipulation.

The user can cause, reverse, speed up, slow down, or otherwise alter chemical reactions, including the speed of oxidization from a slow rust to a burst of flame. They can also affect the chemical reactions in the human body, rendering an opponent unconscious from shock. They can also change energy reaction rates as well, causing batteries to drain of power, force fields to decay, and alter and absorb vast amounts of radiation. 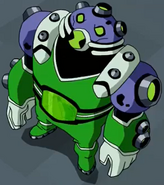 Gutrot (Ben 10: Omniverse) is an alien who's body operates as a natural chemical labratory, being able to mix and create chemical compounds and expel them from his body.

Honey Lemon's Purse (Big Hero 6) is able to inject a number of chemicals into a set of explosives, being able to create bombs with varying chemical reactions.
Add a photo to this gallery
Retrieved from "https://powerlisting.fandom.com/wiki/Chemical_Reaction_Manipulation?oldid=1281461"
Community content is available under CC-BY-SA unless otherwise noted.