The user can channel their own chi through their own body and enhance their physical abilities.

With the fighting technique, Kaio-ken, Son Goku (Dragon Ball series) is able to amplify his ki up to 20 times its base power...

...increase it even further by multiplying the Kaioken by 10...

...to its maximum by multiplying the Kaioken by 20.

Vegeta (Dragon Ball Series) surrounding his fist with his Godly ki to break through Toppo's Destruction and attack him.

Master Son (Gintama) using Qi Gong to manipulate his lifespan, releasing what he stored up to augment his muscles.

Danny Rand/Iron Fist (Marvel Comics) can use his inner Chi to make himself stronger and faster. 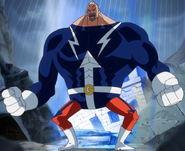 Lao G (One Piece) using Qigong to tap into his conserved reserves of life energy to rejuvenate his body to physical prime and granting him immense strength.

Using her mastery over Qigong, Kyou Kai (Kingdom) can boost her strength to ridiculous levels.
Add a photo to this gallery
Retrieved from "https://powerlisting.fandom.com/wiki/Chi_Augmentation?oldid=1662346"
Community content is available under CC-BY-SA unless otherwise noted.