Ryu Hayabusa (Ninja Gaiden series) can use his ki for his Ninpo spell such as his Art of the True Inferno.

Use one's chi to perform magic.

The power to use chi in the form of magic. Form of Magic. Variation of Chi Manipulation. Physical counterpart of Aura Magic.

Users of this power have mastered their inner and natural energies, also known as chi, and can utilize it as a form of magic. 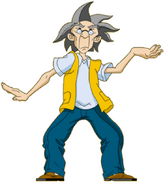 After painting a magic symbol from the Scroll of Hung Chao on his palm, the Old Monk (Jackie Chan Adventures) became able to project powerful chi energy blasts from his hands, levitate, and animate inanimate objects.
Add a photo to this gallery
Retrieved from "https://powerlisting.fandom.com/wiki/Chi_Magic?oldid=1567707"
Community content is available under CC-BY-SA unless otherwise noted.