Kenshiro (Fist of the North Star) using the Tensho Honretsu.

The power to emit/project chi in a variety of forms and shapes. Sub-power of Chi Manipulation.

User can emit/project chi in the form of a shape, wave, blast, etc.

When his ki is at its maximum, Ah Fu-lo (Akatsuki Otokojuku) unleashes the Absolute Secret Technique Charge...

...which takes form as the Japanese kenji character for Charge.

Raoh/Ken-Oh/King of Fist (Fist of the North Star) using his Tensho Honretsu...

...and the Goten Sho to split the heavens apart. 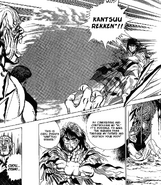 Ryu (Street Fighter) using the Shinku Hadoken.
Add a photo to this gallery
Retrieved from "https://powerlisting.fandom.com/wiki/Chi_Projection?oldid=1512443"
Community content is available under CC-BY-SA unless otherwise noted.