An example of modern Chimera.

User with this ability either is or can transform into a Chimera, a fire-breathing ferocious, mythological hybrid from Greek Mythology, composed of the parts of three animals — a lion, a snake and a goat. Usually depicted as a lion, with the head of a goat arising from its back, and a tail that ends in a snake's head, although more regent descriptions add a dragon to the amalgamation, which may affect the type of breath-weapon they have. 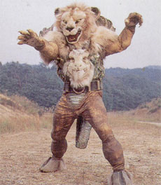 Chimera (Wrath of the Gods) 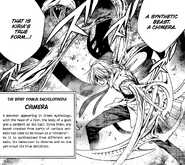 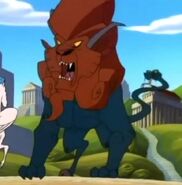 Chimaera (Monster Girl Encyclopedia)
Add a photo to this gallery
Retrieved from "https://powerlisting.fandom.com/wiki/Chimera_Physiology?oldid=1412260"
Community content is available under CC-BY-SA unless otherwise noted.