use the traits of a Christmas entity.

Power to use the traits of a Christmas entity. Variation of Holiday Entity Physiology.

The user either is or can become a Christmas entity, personification of Christmas and its variations. The powers of a user can differ greatly based upon what aspect of the holiday they take the shape of. They do not necessarily need to be one of the traditional holiday entities. 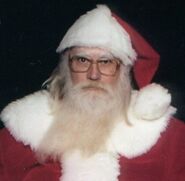 SCP-1933 (SCP Foundation) is a Santa Claus-like character who's body is composed entirely of Irish cream.

Santa Christ (Channel Awesome) combines the benevolence and powers of Santa Clause and Jesus Christ with a level of awesomeness that transcends both.

Mr. Hankey the Christmas Poo (South Park) is the Christmas deity of South Park, and a jolly Poo that visits anyone on Christmas that has a lot of high fiber in their diets.
Add a photo to this gallery
Retrieved from "https://powerlisting.fandom.com/wiki/Christmas_Entity_Physiology?oldid=880443"
Community content is available under CC-BY-SA unless otherwise noted.